Ruby and PHP: which is the best fit for your startup?

So, you want to start a new project from scratch, and you’re looking for the best web development platform. When it comes to web programming languages, it’s not that easy to make a choice which complies with your requirements.

In the following article, we're going to compare Ruby vs. PHP and find the main pros and cons of critical aspects of both technologies. The latest versions of languages are Ruby 2.7.0-preview1 (May 2019) and PHP 7.3 (May 2019).

Both languages are more than 20 years old, mature and proven in production. A lot of great products were created on their basis. So let’s look at these technologies from the beginning.

PHP invented as an HTML templating language in 1994 is now a reliable web development technology which can be used even for general purpose. In contrast, Ruby was released in 1995 as a general-purpose object-oriented language but is now mainly applied in the web development due to Ruby on Rails.

Although both programming languages initially had different aims, currently they are highly competitive technologies on the web development scene.

One of the main differences between Ruby and PHP relies on their philosophies.

The primary objects of Ruby were pleasure and productivity of developers who wish to work with stylish, elegant and flexible language.

I believe people want to express themselves when they program. They don't want to fight with the language. Programming languages must feel natural to programmers. I tried to make people enjoy programming and concentrate on the fun and creative part of programming when they use Ruby - Yukihiro Matsumoto, Ruby creator.

That’s why this language syntax is so elegant and beautiful. Developers love it and enjoy programming in it.

Coming back to PHP, it was primarily written for the personal purpose of Rasmus Lerdorf, its creator. Initially, he just wanted to count the number of visits to his online resume.

Soon, the simplicity of PHP attracted a lot of programmers in the web development world, and within several years it evolved into the first mass-market scripting language. But popularity had a reverse side. Due to rapid growth, it was tough to create a good language design. A lot of articles were written in that manner as "PHP: a fractal of bad design".

Many developers switch from PHP to Ruby or Python because the design of the two latter is much better.

We’re going to compare the following aspects of both web technologies:

So, let’s start our brief survey.

While studying Ruby or PHP, both technologies have a short learning curve. There are a lot of online interactive tutorials, for example, Learn PHP or Try Ruby.

As you see, PHP example has an open tag <?php. Now developers don’t mix any other parts of codes (like HTML or CSS) with PHP as before but still have to use such open tag at the beginning of the file. This action confirms precise compatibility with the oldest versions of the language.

Unlike the languages, frameworks have the steep learning curve. Even for experienced developers, it’s not that easy to effectively operate with several frameworks at the moment.

In this table, you can find the main frameworks of both languages and the number of Github stars. As it shows, Rails is the front-runner in the world of Ruby, while in PHP world, Laravel took over the show.

You may also like: 4 Useful Git Commands That Will Make Your Life Easier

While Rails is dominating over other Ruby frameworks, competition between PHP frameworks is much stronger because PHP gained popularity long before any other web development languages did it.

From the other side, Rails has gained the fame of the first mass MVC framework on the web. A lot of frameworks in many languages including PHP have copied ideas from Rails and Laravel was among them.

There is a variety of online resources providing statistics on the prevalence of these two programming languages.

3.1 Sites written in Ruby and PHP

According to W3Techs statistics, PHP is an absolute leader in the number of sites written in it. 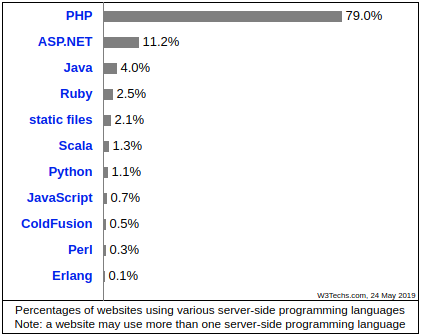 As we see, the total percentage of PHP use is over 79.0%. However, it is necessary to admit that such CMSs as Wordpress, Drupal, and Joomla cover a vast part of the PHP market.

BuiltWith.com shows that the Rails framework is more popular in comparison with PHP frameworks.

As we see, the sites built in Ruby on Rails have the biggest numbers among all categories.

Related reading: 7 Reasons to Use Ruby on Rails for Your Startup

As stated by Github report, Ruby and PHP are going very close by the number of repositories created in 2008-2018. 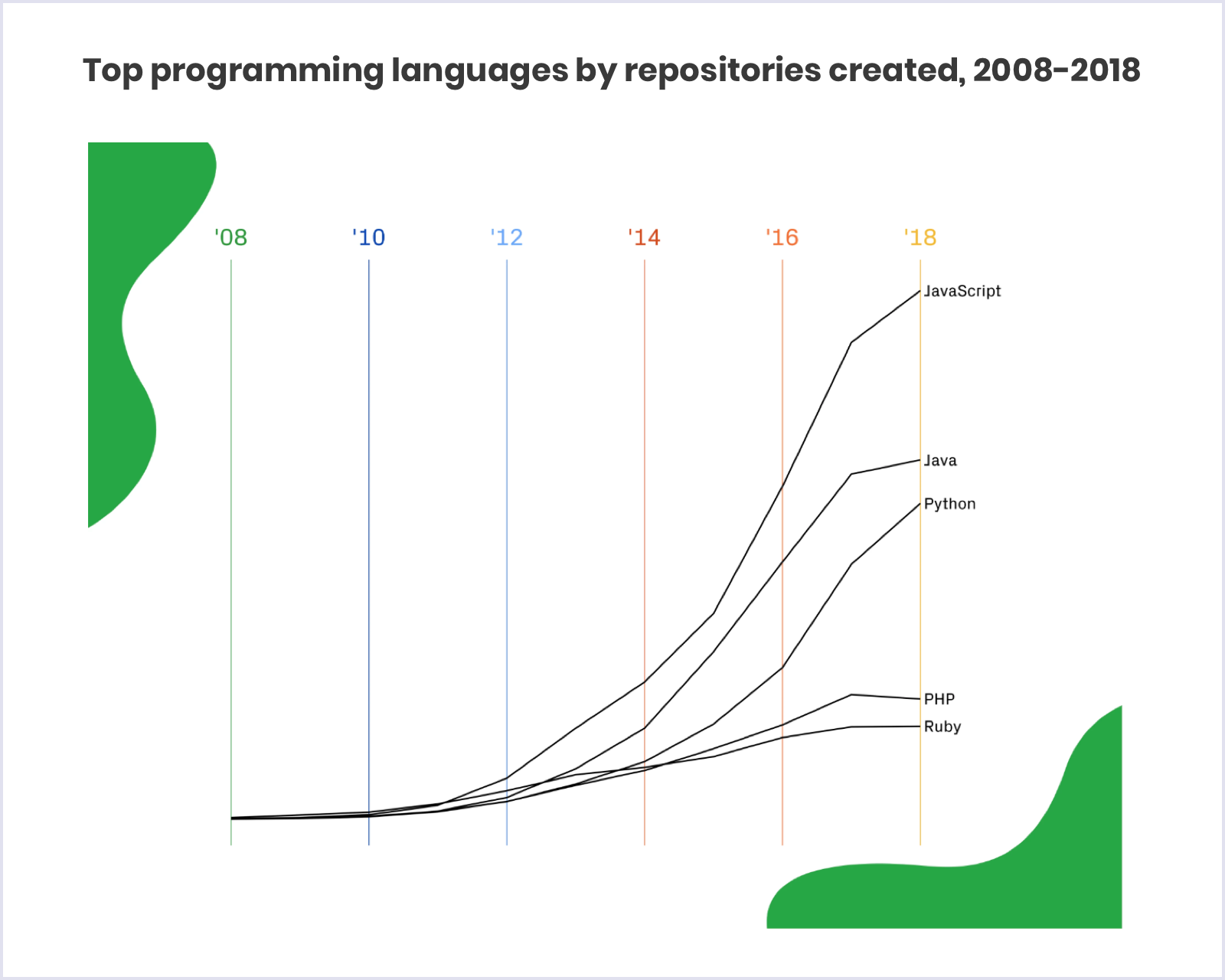 This Google Trends graph shows that PHP has been of higher demand in the United States over the past year.

Overall, although PHP is more popular among all sites, Ruby (and Rails) prevails over PHP by the number of developers’ activity on the Github and websites built with frameworks.

Many PHP projects were formerly written without any framework or reinstalled as copies of Joomla, Wordpress and Drupal systems. Whereas, a vast amount of custom projects and startups was created with Rails.

A community built around a programming language represents an excellent force for developers.

Both technologies have great communities. One of the main distinctive features in Ruby vs. PHP comparison is that Ruby has one community based on the Rails framework, while PHP has numerous communities fragmented depending on a framework or existing products.

In general, we can highlight three branches in the PHP community:

In this regard, it is fair to compare Rails developers and those PHP developers who work with frameworks. Consequently, the number of Laravel developers, for example, are less than Rails programmers.

In contrast, we can’t downplay the big circle which the strong Ruby on Rails community formed on Github. Together they focus on robust and high-quality development, making a significant contribution to collaborative efforts.

There is an opinion that PHP developers are cheaper and could be found easier than Ruby (Rails) developers.

The truth is that the price for the developers’ services depends on their qualifications, and the highly qualified programmers are well paid in both languages.

Actually, at the moment "PHP developer" term doesn’t exist as before. Right now we can talk about Symfony or Drupal developers, for example. And the cost of Rails and Laravel / Symfony engineers is approximately the same.

Below you can find Indeed statistics concerning job postings for both web technologies. 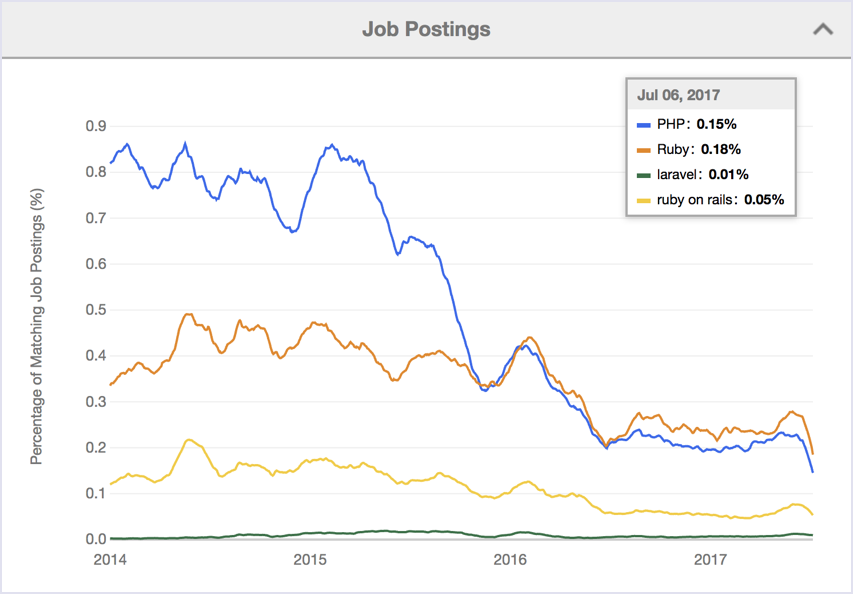 As it is shown, the demand level for the programmers of both languages was nearly the same.

But at the same time, demand level for Rails developers is higher than for Laravel which is the top PHP framework.

Now, all people in web communities do is compare Ruby vs. PHP technologies performance.

Having a look at history, we can find that Ruby and PHP used to have approximately the same speed at some points. But now PHP 7.3 speed is significantly improved. It is much faster than the previous versions. Excellent work, we have to say, now the ball is in Ruby court.

Although the developers tend to improve technologies performance, it’s not the reason to opt for any language just because of its speed. Hardware upgrade would be a more practical solution to the situation.

You may find interesting: How to Implement Elasticsearch When Developing a Rails Web App

Each of the given programming languages has its unique aspects and unique energy, serving the purpose for which they were invented. So let’s take a glance at the strong sides of both.

Just like the strengths, there are always some pitfalls in each language. Anyway, there’s still room for improvement.

When choosing between these two programming languages, you won’t find a definite answer which is the best one. Both of them have benefits and drawbacks.

Now PHP has improved performance, but its language design is still weak. Ruby needs some speed increase but has an elegant design and syntax. They both allow producing beautiful and robust web applications.

At Codica, we chose Ruby because we like the design and simplicity of this language. It helps us deliver successful solutions to fit our customers needs best, as well as provide end-users with web products they love.

Are you looking for a custom development team that can help you with a Ruby on Rails project? Let’s get in touch!

MVP and Prototype: What’s Best to Validate Your Business Idea?