Pros & Cons of Using Ruby on Rails for Web Development

HomeBlogTechnologyPros & Cons of Using Ruby on Rails for Web Development

When building a new product, should you choose Ruby on Rails for web development?

Basecamp, GitHub, Dribble, Airbnb, and Groupon said “yes” and got it right. During recent years these world-famous companies have successfully implemented solutions built with Ruby on Rails.

With its fast application delivery, great ecosystem, and cost-efficiency, the framework will surely become number one for your product development.

Being huge fans of Ruby on Rails, we have prepared a list of reasons why both developers and business owners choose this technology for their projects. At the same time, we did not leave out the main weaknesses of this framework.

Insights into Ruby on Rails

First, let’s discuss Ruby on Rails in terms of numbers:

A short history of Rails

The history of Ruby on Rails dates back to the early 2000s when David Heinemeier Hansson was working on a project management tool called Basecamp. He improved the Ruby programming language and created a framework known today as Ruby on Rails.

Fast speed and ease of the web application development and deployment that distinguish Ruby on Rails from other frameworks were duly appreciated by many technical experts. For example, Yukihiro Matsumoto, creator of Ruby, refers to this tool as “the killer app for Ruby”.

The framework achieved a major milestone in 2006 when Apple Inc. launched Mac OS X v10.5 "Leopard" that included Ruby on Rails in the default install.

Since then, the Ruby on Rails framework has been greatly improved with new functionality and has increased its popularity noticeably.

Ruby on Rails is an open-source framework applied for building web apps. The technology runs on Ruby and focuses on simplicity and refined output.

If you learn “The Rails Way”, you'll probably discover a tremendous increase in productivity.
- The Official Ruby on Rails Guide

This rule states that every code snippet should have a single, unambiguous, and authoritative submission within a system. Why does this play an essential role? With this principle, your app code becomes cleaner and contains fewer bugs. Besides, developers restructure the code or refactor it hands-down.

This concept supposes that systems, libraries, languages you work with assume lots of logical situations by default. It means that you need to adapt to them and specify some unconventional aspects of a web app instead of reinventing the wheel and creating your rules each time. With this approach, programming becomes easier and more productive.

Pros and cons of using Ruby on Rails for web development

Picking the appropriate technology for web application development is like choosing a phone. There are gadgets like push-button that are extremely reliable but clunky. Others offer extensive functionality but are difficult to use. Finally, we have quick and appealing, however expensive phones.

The same goes for application web development technologies. There is a great variety to choose from. To make the right decision, you should take into account such factors as a learning curve, scalability, hosting requirements, ease of installation, documentation, etc.

Below you can see the most considerable pros and cons of Ruby on Rails.

Advantages of Ruby on Rails

In recent years the cybersecurity issues have become a red hot topic for many businesses. The alarming statistics provided by Cybint Solutions show that 64% of companies have faced web-based attacks, while 62% of companies experienced phishing & social engineering attacks.

The chart below shows that the latter type of cybersecurity issues mostly aim at SaaS, financial institutions, and e-commerce platforms.

That is why, when selecting a technology, it is vital to take into account the security of your future solution.

The built-in mechanisms of Ruby on Rails guarantee that a web page or application developed with its help is resistant to vulnerabilities and prevents the following common threats:

Pretty intuitive, compact, and easy-to-understand syntax of this technology ensures the highest usability to programmers.

Ruby on Rails developers can write less code, making the process of creating a web application faster. Through the framework readability, there are no grounds to add comments. As a result, code is getting more understandable for developers.

Besides, as projects stick to the identical rules and philosophy, programmers can shift from one Rails project to another at any development stage.

You may also like: How We Built a Slack Bot for Time Tracking with Vue.js and Ruby on Rails

The framework offers a significant number of free open-source libraries called gems. They extend or modify the existing functionality of web apps and help solve many common issues. It does not matter what feature you want to integrate - with a high probability, you will find a gem for it.

Today, the quantity of Ruby gems has reached 158 700+ with over 48 billion downloads.

In addition to gems, the framework provides coders with a range of library extensions and utility classes, the so-called Active Support that aims at developing both Rails applications and the technology itself.

The high development speed is one of the key reasons why startup owners opt for Ruby on Rails. This technology helps them streamline the MVP app development process and build a top-notch web application even within a limited budget.

Ruby on Rails is famous for its vibrant community. Its active members contribute to the technology elaboration, help each other, and enhance the code base with new functionality. They create numerous Ruby on Rails dedicated websites, forums and chat rooms where developers can find answers from coders who have experienced a similar problem and came up with a solution.

Also, Ruby on Rails community holds RailsConf. It is the largest gathering of RoR developers where they can share their experience with other fans of this framework.

Finally, the members are constantly creating guides, manuals, lessons, and other educational materials.

Implementation of complex business logic in a web application is not a problem for Ruby on Rails. For example, if you need API, developers who use this framework will create it really fast. The only thing you should do is to add a front-end framework like Vue or React, and that’s it. Your web application is ready.

Today we are witnessing the growing popularity of front-end frameworks such as React, Vue, and Angular. These tools are often used together with Ruby on Rails due to easy integration of RoR. You can take any framework you like and develop front-end components quickly and effortlessly.

You may also like: Avoid These Costly Mistakes During Web Application Development

Disadvantages of Ruby on Rails

These two parameters are essential when it comes to an application’s success. With plenty of apps available in the market, users become more demanding. They expect web applications to load quickly and seamlessly.

As a Google study shows, each second delay decreases the number of page views.

Runtime speed is not the strongest suit of Ruby on Rails. Surely it will be enough for small apps without millions of users and huge traffic, however when building a solid project, it may become an issue.

However, the Ruby on Rails 6.0 version released in August 2019 contains significant enhancements in terms of security, new features, and improved performance.

For example, one of the new important features is support for multiple simultaneous database connections. It means that the RoR coders can now boost the performance by using two databases to split the workflow between them.

With a hard dependency between components and modules, Ruby on Rails is ideal for standard web applications. However, when it goes about an app with some unique functionality, customization can be challenging.

Configuring routing, database migrations, and other elements make the process of creating a product longer. Thereby, you have to choose between the app originality and the development time.

During the last couple of years, there has been a decline of Ruby on Rails popularity. If we take a look at the statistics data provided by Google Trends, we can see a lack of interest in this framework.

Despite the increasing number of developers and the supportive community, the technology is not as widely used as, for example, Laravel for PHP, or Django for Python. The main reason is that the framework is noted for its steep learning curve. Developers who master Ruby on Rails as a rule know one or two programming languages.

For business owners, it means that hiring an experienced Ruby on Rails development agency may become rather a challenging process, if compared to finding a PHP, Java, or Python web company. At the same time, RoR coders are usually more experienced and skilful.

Usage of Ruby on Rails in web development

The technology is applied to create multiple types of web products. With its powerful features, you can develop a simple application or a complicated platform.

Let’s take a closer look at the projects that are best suited for Ruby on Rails framework.

Ruby on Rails is one of the most suitable technologies used by startups. The framework is applied when building prototypes and for MVP web development, that makes Rails be highly prized.

Such popular platforms as GitHub, Twitter, Airbnb, Dribbble were primarily created with Ruby on Rails.

Needless to say, startups want to enter the market at the earliest opportunity. With a lot of gems provided, the development of web applications with Ruby on Rails becomes more speedy and cost-efficient.

One of the vital framework benefits is the ability to build a secure web app by default. That is of high importance when we speak about e-commerce platforms.

The previously mentioned gems can help you implement almost any feature your e-commerce platform may require: from payment gateway to a help desk. With this framework, you will have your online marketplace up and running in no time.

Besides, you need to carefully protect payment data and personal information of both buyers and sellers to build trust in the platform. At the end of the day, your ability to secure sensitive information of your clients can significantly boost customer experience. That’s when Ruby on Rails for web development becomes the right choice.

Shopify, Fiverr, Groupon, and Etsy were originally based on Ruby on Rails.

When building SaaS products/applications, security becomes one of the primary concerns. Ruby on Rail is the right technology for keeping your web product safe. There are lots of precautions that make your sensitive information protected within this framework. They include using numerous gems for authentication and increasing password length, multiple built-in encryption libraries, skipping forgery requests and strong parameters usage.

Basecamp, Zendesk, and GitHub are amongst the most well-known SaaS apps built with the technology.

Looking for a reliable Ruby on Rails web development company?
We are passionate fans of Ruby on Rails and know how to create a secure, flexible, and successful web application with its help.
Learn more about Custom Development 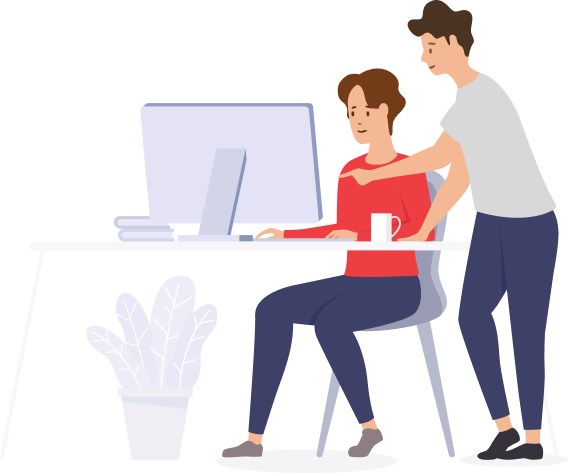 Efficiency, fast application delivery, and scalability of Ruby on Rails for web development make it the right choice for all kinds of projects — from e-commerce platforms to SaaS solutions.

At Codica, we have delivered numerous products built with this framework. We firmly believe that Ruby on Rails development is fast, convenient, and cost-effective.

Contact us if you have a project idea — we will be glad to assist you in creating a successful and reliable app with RoR.