Web development is constantly changing and overgrowing. And since JavaScript is the top choice for everyone in frontend development, JS trends is a hot topic every year. New technologies emerge: up to date, we can see dozens of JavaScript technologies competing to become recognizable and popular among the programming community.

The leading technologies and tools are also changing very often. Numerous companies have been switching their tools lately. For example, last year it became clear that 9GAG turned from ReactJS to Vue.js.

Now, let’s take a look more precisely at the changes that 2019 is bringing.

According to Developer Survey Results 2019, JavaScript continues to lead among all the programming languages. 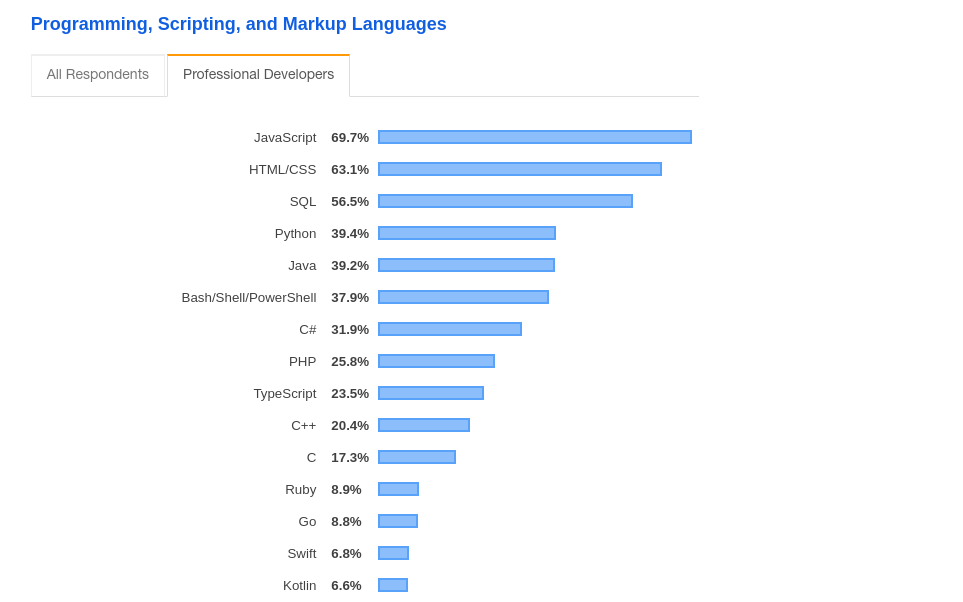 Thus, it seems reasonable to discover new JavaScript trends in 2019, if you work with it. All the libraries, frameworks and tools listed below are frequently the top choice for any web developer.

Despite being relatively new, Vue.js is becoming more and more popular every day. It has already managed to earn the trust of GitLab and Alibaba.

Here are the stats from the State of JS, showing respondents' experience with Vue.js over time that proves its enormous progress.

Vue was created in 2014 by Evan You, a foregone software developer at Google. He was in charge of UI/UX prototypes and creative experiments. Afterwards, he summarized his knowledge on web development and created an entirely lightweight framework having the idem capability.

Currently, Vue.js is regarded as one of the most drawing SPA frameworks having almost 157.000 stars on GitHub, which is surprisingly more than React has.

Furthermore, we can see almost 49.800 questions on StackOverflow with #vue.js and about 31.900 npm packages free for Vue developers.

Vue.js is a perfect option if you are seeking building lightweight and easy-to-fix applications. The learning curve is low that allows studying up the tool promptly and setting up software development.

In our opinion, Vue.js will continue growing and gaining popularity in the coming years. The situation will change fundamentally in 3-4 years. At that time, Vue will beat its competitors, and the community will massively switch the tool in favor of Vue.js.

React has been holding a position of JS tools leadership for the past three years and it’s not giving any chances to the rivals. We don’t currently see anything that could change this trend among Javascript frameworks in 2019. React goes on being the most popular choice for web development among the coders in disregard of Vue.js.

ReactJS was created by Facebook in 2013 and is still being implemented in their projects. React is considered to be the top choice for web development having over 143.500 stars on GitHub.

We can see over 188.200 questions within #reactjs on Stack Overflow. Furthermore, over 113.350 npm packages are created for React developers.

According to Developer Survey Results 2019, React holds the first position of Most Loved technologies. 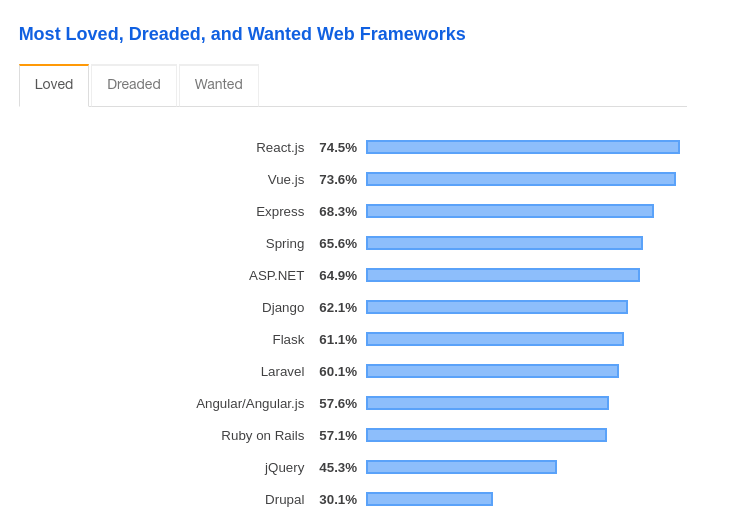 Furthermore, here are the stats of React downloads for the last year.

To conclude, up to date ReactJS is way forward the most popular JS tool with the biggest knowledgebase, support, and community which obstructs Vue.js to overtake its great rival.

If you’re wondering what tool to choose for your project in 2019, we recommend reading this article comparing Vue and React.

Even being new to web development, you have definitely heard about Angular. It is a JavaScript-based open-source front-end web framework released by Google in 2010. It is used to meet many of the challenges encountered in developing single-page applications.

Over time, we have seen many versions releases from Angular 1 through 7 frequently, which in a sense deters many companies and projects from adopting it.

You may also like: The Power of CSS Processors in Web Applications Development.

According to the popularity, here are the statistics of Angular prevalence for the last two years.

Moreover, Angular is considered one of the most wanted JavaScript technologies as per the Developer Survey Results 2019. 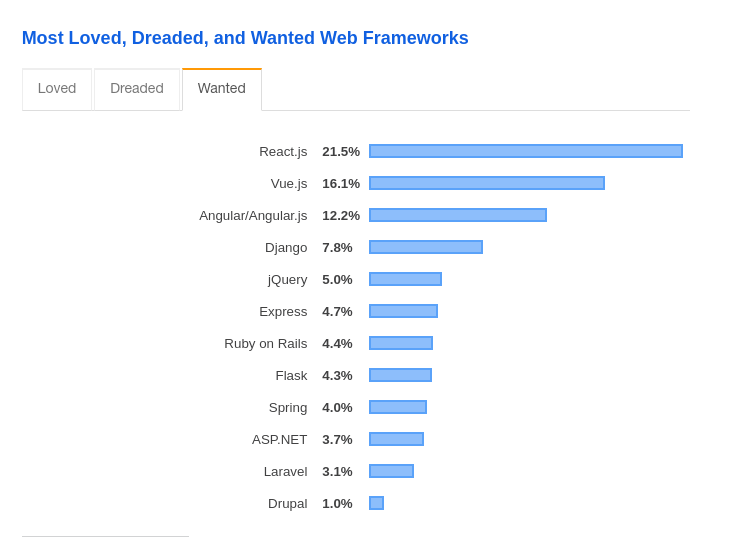 4. GraphQL instead of REST API

Many consider GraphQL will become a replacement for the REST APIs in 2019. What does this technology stand for and why is it better than the previous leader?

GraphQL, designed by Facebook and having 12.4 thousand stars on GitHub, is a query language for APIs and a runtime for fulfilling those queries with your existing data. GraphQL provides a complete and understandable description of the data in your API, gives clients the power to ask for exactly what they need and nothing more, makes it easier to evolve APIs over time, and enables powerful developer tools.

Here are the three most important issues GraphQL solves:

Having said that, the big problem with the REST API is a large number of endpoints. This forces clients to make many requests to get the right data.

REST API does not offer the client a query language. The client does not affect what data the server returns.

Of course, in 2019 there will be a market niche for materials on working with GraphQL because many people are interested in mastering it.

You may also like: 4 Useful Git Commands That Will Make Your Life Easier.

The web development industry is rapidly growing and looking for new technologies and tools to implement. Many JavaScript programmers also follow trends to improve, simplify, and accelerate their development process. New versions of many JavaScript frameworks and libraries are released annually to meet those coders’ desires and become recognizable and popular among others.

The community is currently proceeding to React. Other web development tools are trying to follow the same technical steps. React is a promising and high-potential option, but you should also consider Vue.js since it’s developing steady and fast. It has already outrun Angular, but this tool still has some features to be improved. In our opinion, Vue.js needs several more years to beat its main competitor.

Concerning the connection between the server and frontend, you should pay attention to GraphQL as an outstanding and promising replacement for REST APIs.

To sum up, if you wonder what new JavaScript framework or tool to use in 2019, we recommend trying each one listed above. Having experienced all the options, you can make a choice and say which one works best for your project needs.

Vue vs React: Choosing the Best Tool for Your Project in 2019

The Power of CSS Processors in Web Applications Development